Home News/Events Blog Should We Focus More on

Should We Focus More on Reducing Imports or Increasing Exports?

We often hear of the need to increase U.S. exports, thus increasing GDP, employment and tax revenues and reducing foreign debt. Actually the country needs to reduce its net export deficit. Due to the approximately 30% cost advantage of competing domestically instead of overseas, the relative volumes of our annual imports and exports, and a range of exogenous impacts on the U.S. economy, it is almost surely in the country’s interest to place more emphasis on substituting domestic production for imports (reshoring) than on increasing exports. Despite the clear advantage of reshoring, the U.S. government spends about 60X more on promoting exports than on encouraging reshoring. Reasons follow:

1. U.S. manufactured products are about 30% more price competitive selling against imports in the U.S. than they are competing in overseas markets. The table below shows price comparisons in China and the U.S., assuming constant margins, for a U.S. made product that is competitive here. The difference arises because exporting adds, on average, at least 15% to the total cost of a product from either country. 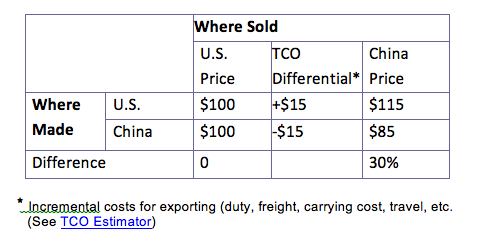 For a given % change in imports or exports of goods, the $ impact on net exports will be 44% higher by decreasing imports rather than by increasing exports. Go where the leverage is!

3. U.S. national advantages of substituting domestic production for imports, rather than increasing exports, include:

a. Increased stability and defense readiness by broadening our manufacturing base into categories where we are now weak, e.g. machine tools, high end electronics, mold and die making, automotive, rather than narrowing the base into the areas where we are now strong, but that are aggressively targeted by low-wage countries, e.g. earth moving, agricultural equipment and aerospace.

b. A broader range of components and sub-assemblies that are competitively produced in the U.S. helps motivate companies to keep their assembly plants, and eventually R&D, in the U.S., rather than relocating off-shore in search of partnerships with local vendors.

d. Quick impact on the economy and employment: U.S. based companies can start selling here or start selling more here much faster than they can penetrate even one foreign market, much less the several required to achieve the opportunity represented by reducing U.S. imports.

e. SMEs, the main source of job creation, are much more likely to compete in the domestic market than overseas.

6. Conclusion: The U.S. can increase manufacturing faster and at lower cost by competing more effectively against imports rather than competing more effectively for share of foreign markets. It is essential that we take this action now while the U.S. market is still the largest market for most products and thus the most desirable for U.S. or foreign owned manufacturers to address via U.S. based plants.